Handspun dog hair has a different quality than machine-spun yarn. Dog hair makes a useful product, yarn, from the hair that your pet sheds, making it a wonderful memento. It is generally a soft, fuzzy yarn resembling Angora. Dog hair yarn is warmer than sheep’s wool, some say 8 times warmer!

Spinning dog hair is nothing new. Clothing and other items made from dog hair, sometimes referred to as chiengora (chien is French for “dog”), isn’t a new niche fad – in fact, it’s been around for centuries. It has been found in prehistoric Scandinavian textiles and the  Salish, indigenous North Americans who lived in the Pacific Northwest, were known for making blankets from dog hair. Dog hair sashes, made by the Anasazi, were found in Obelisk Cave, AZ. These date back 1500 years and are on display at the Mesa Verde Museum, CO.

The preparation to spin dog hair and the task of spinning the yarn itself is time-consuming, but I find it rewarding and my clients love their yarn for its usefulness and as a keepsake of their beloved pet.  Upon receiving your dog’s hair, I wash it and lay it out to dry on screens. I will separate the fiber and fluff it to facilitate the drying. Next, I card the fiber. This aligns the fibers to prepare them for spinning. For large orders, I use a drum carder. The carded fiber is then spun into a yarn or “singles” which will be wound into balls and stored until all the fiber is spun. I then take 2 strands of the dog hair yarn and spin them together, this is called plying. When all the yarn is plied, I skein the yarn and wash it, setting the twist. When dry, I weigh it. The finished yarn weight is how your fee is calculated. 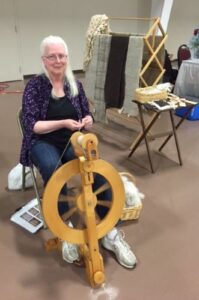 The above photo is of me demonstrating spinning dog hair at the 2016 Northern Illinois  Norwegian Elkhound Specialty Show.